30-ball bingo is one of the newer and much more speedier kids on the bingo block. It was introduced to the online bingo world to shake things up a bit from the more classic style 90-ball bingo games, and it’s often referred to as ‘speed bingo’.

It’s essentially a much smaller and quicker version of 75-ball bingo, or pattern bingo as that is also known. It’s played on a small grid style ticket, and each ticket has 9 squares containing random numbers from 1-30.

It’s super easy and simple to play, and due to the small amount of numbers involved, it’s more of a quick fire bingo game. Most sites will only have one way of winning, and that is by simply marking off all the numbers on your card. Some sites are starting to give out a simple pattern to complete instead, but this is quite rare as there so few numbers on each card.

This particular bingo variant can’t really be found in land based bingo halls unfortunately, but it’s a nice fun game to play on a smartphone or tablet when you’re on the go. Tickets are usually cheap and prizes can be just as nice as those on the more classic games, so be sure to try out some 30-ball ‘speed bingo’ next time you’re online for something a little different.

Why Has 30-Ball Bingo Become So Popular?

The most popular style of bingo played here in the UK are the classic 90-ball bingo games.

This is primarily because it’s the first style of bingo we ever saw here in the UK in bingo halls and online, but players have ventured out to these newer 30-ball variation games more recently.

Here are a few reasons why:

How To Play 30-Ball Bingo 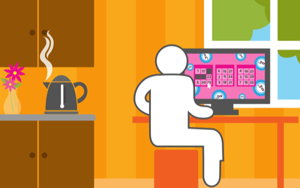 Playing 30-ball bingo is fairly similar to most other bingo games, in the sense that you simply need to cover the numbers on your card as and when they are called.

The only difference with 30-ball bingo however, is that you will only have one chance to fill out the whole card in order to win the game.

Some online bingo sites are slowly starting to introduce patterns into online bingo now too, but as mentioned before this is quite rare at the moment and you will most likely just have to complete the whole card to bag the prize.

How Do 30-Ball Tickets Work?

The following table shows how the numbers from 1-30 are shared across a 3×3 grid, and you can purchase up to 96 tickets per game.

Can You Win Twice In One 30-Ball Game?

As mentioned before, the main aim of 30-ball bingo is to cover every number on your card in order to win the game.

Some sites might offer a vertical or horizontal pattern sometimes instead, but as there are so few numbers, this is quite rare.

It’s worth noting that as games tend to go so quickly however, you can play more games in less time compared to other standard bingo variants.

This will obviously require you to purchase more tickets overall, but it technically gives you the chance to play more games and potentially bag more prizes.

How Much Can I Win Playing 30-Ball Bingo

The main things to know about 30-ball bingo, is that it’s super fast and super simple. It’s the perfect ‘on the go’ bingo game, and it’s brilliant for those who don’t have time for the more classic style bingo games.

You will generally only ever have one chance to win on any given game, however due to the speed of the game, you can play more games a minute compared to say 90-ball bingo.

The fact that the game happens at such speed really adds to the excitement all round, and it’s brilliant to try out in between other bingo games and also if you fancy jumping online into the chat rooms to speak to friends at the same time.

The only real downside to 30-ball bingo at the moment, is that it isn’t yet available across all online bingo sites here in the UK. This is something that’s rapidly changing however, and I have no doubt that in time it will soon be available across lots more sites so keep those eyes peeled.