It’s known to us all worldwide, where there’s a game, there might also lurk a cheat…

Whether it be at sports, cards, bingo, or board games, or even at the simple egg and spoon race at school – there is often a player who might try and ‘bend’ the rules slightly to their advantage shall we say, in the hopes of cheating the system and walking away with the prize.

You probably wouldn’t think it possible to cheat at something like a game of bingo however, as tickets and numbers are always generated at complete random. Plus the industry as a whole also prides itself on always encouraging fair and responsible play as well, so how is it even possible to ‘make up’ your own rules?

Well, unfortunately there are a few people out there who thought it might be interesting to try, and they ended up causing quite a scandal across the globe in the process. Not all cases of cheating when it comes to bingo have been reported obviously, and who knows – there may even be some people out there who have gotten away with it from time to time?

Here are a few cases that didn’t end up running so smoothly however, wherein ‘a prize’ was extremely far from what they actually ended up winning…

What would have usually been just a regular weekly bingo night at a church in New Jersey in 2019, actually ended up in a police call-out resulting in charges.

The New York Post reported that Teresa Davis, 71, and Keasha Brockington, 38, claimed to have won a $200 prize on a game of bingo at their local church hall in Runnemede, NJ.

After much speculation however into the supposed winning ticket, it was discovered that the women had allegedly taped over the original digits with the winning numbers and made a fraudulent claim.

The Pastor of the church, Rev. Joseph Ganiel told the post that he had trained any volunteers to screen bingo cards for this very reason.

I tell them to look for anything that has tape on it. If it has tape, they should hold it up to the light to see if the same number is on the front and the back.

Police were soon called, and both women were charged with improper behaviour and released on their recognizance. It’s unclear what punishment the women then faced for their alleged misdeed however.

Pastor Ganiel said it’s the first time in 20 years there had been a scandal at the church’s typically innocuous games.

10K In Rigged Bingo Leads To Arrest For Caller

In December 2019, the luck finally ran out for John Cook from Monroe, Louisiana, USA. Cook was arrested and charged on one count of felony, after being accused of rigging over $10,000 in prize funds on bingo games at his local bingo hall.

According to an article in News Star, 43-year old Cook was found guilty on camera of manipulating ‘Bingo Bonanza’ games. Footage allegedly caught him handpicking the balls he wanted to play, and then hiding the winning one until he was ready to end the game.

Cook supposedly did this four times resulting in over 10K of prize funds, and one person who won twice, turned out to be his own sister. Another winner was also captured speaking to Cook before their game took place, and both other winners were seen giving Cook money after the winning games concluded. He was eventually charged with theft between $10,000 and $25,000, and bail was set at $11,000.

It’s unknown how long Cook then remained in custody.

According to an article found in the American news feature Fort Worth Weekly, even charity bingo games are no stranger to fraudulent goings-on.

In the late 1970’s, Tennessee lawmakers legalized charity bingo in the US, but numerous scams, bribes, extortions and fraudulent activities, soon then plagued the charity bingo scene.

Governors were suddenly bribed, and heads of state were found of implicating fraud. Bingo halls were tipped off about audits, and legitimate charity organisations were receiving very little of the money. Two representatives also allegedly committed suicide as well, apparently over fraudulent claims and charity bingo scams.

Other American charity bingo scams include:

By 2004 however, over $30 million was raised for charities throughout the state of Texas, and this amount did eventually make it into the correct hands.

Games can be found quite easily across the city however, and one particular Reno bingo engineer took it all very seriously indeed…

According to an article in Wired.com back in 2002, 38-year old software programmer – Brett Keeton, came to an unfortunate end after becoming the focus of a huge bingo fraud scandal.

He was reported to have taken his own life by jumping off San Francisco’s Golden Gate Bridge, after allegedly rigging his own bingo cards each time he played throughout Nevada.

Keeton was a programmer for GameTech International, a company which ran two varieties of electronic card “minders”, that kept track of any numbers called throughout a game. Both systems enabled players to choose more than one card to play at a time, and both versions still exist across casinos today.

Investigators from the Nevada Gaming Control Board looked into what Keeton may have done to get the fixed-base machines to give him extra cards. One programmer speculated that Keeton may have sent out an altered software code in a routine software upgrade, but it was never made clear officially how he’d triggered the machines.

Casino sources say he didn’t claim prizes large enough to have forced him to fill out an income tax statement, perhaps in order to avoid being noticed. He was eventually rumbled one evening however for irregular play by a casino security team, and the following night, he took his own life.

The incident was a huge surprise to security veterans across the strip, who all who noted that casinos spend millions to protect against cheating in the high-stakes games.

You always figure they’re going to try to get away with something at the blackjack table or on the video poker machines, but rigging a bingo game?

The payout just isn’t that big on bingo. It’s sort of a waste of criminal talent, actually.

Officials closed down the fixed-based electronic systems for a few days until the software bug had been fixed, and players were then only given paper bingo cards until everything had been thoroughly regulated again. 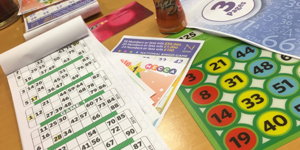 As you can see from most of the stories above, nearly all cases of bingo fraud have occurred at live, land-based bingo events. Incidents are very rarely found within official bingo environments however, such as bingo halls, clubs, chains and branded venues.

The Las Vegas casino scandal was an extremely unique case, and clubs these days go above and beyond to avoid such events ever happening again. Bigger branded bingo chains, especially here in the UK, have no known cases of fraud – none that have ever been reported anyway. Safe and secure play is of top priority across the bingo industry, and any fraudulent attempts are taken extremely seriously.

Is it Possible To Cheat In Online Bingo?

Finally, the question that so many people ask, is it possible to cheat when it comes to online bingo?

Well, for anyone out there who’s been wondering this exact thing – the answer is, not really, no.

I’m sure many people may have tried over the years, but there are absolutely no official known cases of cheating in online bingo.

This might be because the odd person has gotten away with it here and there, or it’s most probably because it is basically impossible.

Here are two of the main reasons why:

Cheating – Is It Really Worth It?

Cheating in any sense never really ends well let’s face it, and as you can see from the above stories, it’s just not worth it.

‘Fraudsters’ and ‘cheaters’ will always exist however, and some will most likely still try their luck on bingo from time time.

Systems are so advanced these days to stop any fraudulent activity though, so it’s always likely to lead to more than just a jackpot…