Some players love to play slots games alongside online bingo, but with Slingo you get to do both at the same time. As the name suggests, it’s a coming together of the two separate gaming styles, and it offers players a ‘one of a kind’ experience that’s totally unique to the Slingo brand.

The exciting bingo variation is massively popular within the online gaming community, especially here in the UK, and the brand continues to grow by the day. The original company was founded in America way back in 1994, and they’ve since gone on to gain over 55 million players across the world.

In 2015 the Slingo concept was sold to the London based company, Gaming Realms, and this company then launched ‘Slingo Originals’. These are the main games that you’ll now find across most UK online bingo sites, and they currently run on the popular Jumpman Gaming software. Brands such as Rainbow Riches, Deal Or No Deal and even Monopoly have all teamed up with Slingo too, so you can play these bigger branded games -but in a fun and unique Slingo style.

To win at Slingo you basically need to complete all lines and full houses just as you would in a regular bingo game, but the main difference is that the numbers are generated via spins on a slots reel at the bottom of the screen. This super fun feature combines both bingo and slots brilliantly, and it’s a fast paced gaming experience that’s rather unlike anything else out there. There are quite a few other online bingo variants on the market these days, but if you love the thrill of a slots game, then I’d say Slingo is definitely worth a ‘spin’.

What Is Slingo And How Do You Play It? 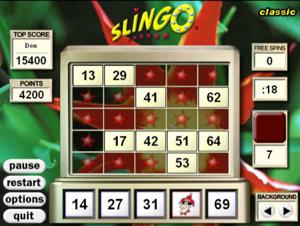 As mentioned above – Slingo is a mixture of both bingo and slots, hence the hybrid name, ‘Slingo’.

If I’m honest, I think it does generally have more of a slots vibe as a whole, but it is a really nice original game that combines both worlds well.

The unique ‘Slingo’ experience means that you’ll basically spin on the slots reel, and each spin then generates the bingo numbers called.

The main principle of the game is to complete certain lines/coveralls throughout, and each time you get a ‘Slingo’ you will progress up the prize ladder. 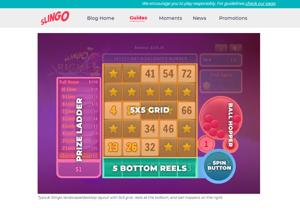 Although there are many different themed versions of Slingo now, including the following:

Each Slingo card will essentially always look the same.

The game follows the popular 75-ball bingo format, no matter the theme, and each Slingo card contains a 5×5 grid of numbers ranging from 1-75.

The image here shows you what a basic Slingo game card might look like, and each one will always contain variations of the following:

How To Win A Game Of Slingo

Slingo is all about patterns, lines and full houses etc – just like in a regular game of bingo. The image here shows the examples of winning patterns you’ll need to complete, and most games will also then play for a full house to finish.

Here are the basic steps you’ll need to take to win on a game of Slingo: 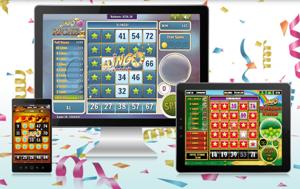 The return to player percentage with Slingo can vary all depending on the different type of game played.

The majority of the main Slingo games fall somewhere between 95%-96%, but there are a few of the brand’s more pure form slots reels that can be around 85%.

Overall however, most of the Slingo games found on online bingo sites will fall within the upper percentage range. 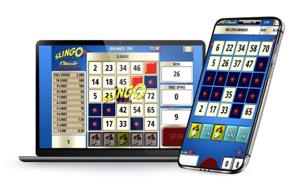 Another iconic feature of the Slingo brand, is the addition of certain bonus symbols that crop up throughout each game.

These fun characters have been part of the Slingo experience ever since it was invented, and they’ve remained part of the game to this day.

These symbols will give you the chance to shake things up a bit should they appear, and they each have their own unique purpose in a game.

Here are some examples of the main Slingo symbols that you might come across in the slots reel. More advanced games may have different ones depending on specific themes, but these are the basic Slingo classics: 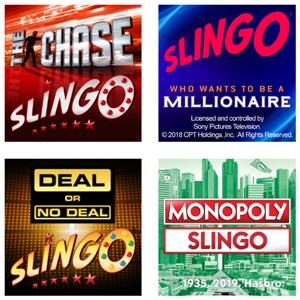 The team at Slingo Originals are always creating new games to keep up with popular trends, culture/TV shows etc, and they are currently in partnership with quite a few top online gaming brands.

The actual games themselves generally always follow the same ‘Slingo’ type rules, however bonus features, prizes, symbols etc can all differ, depending upon which specific theme you play.

Some examples are as follows: 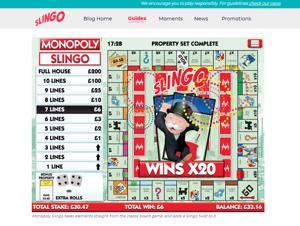 Monopoly Slingo is one of the most recent additions to the Slingo Originals family, and it offers a really nice nostalgic twist to the classic Slingo game.

It’s a much more advanced version of Slingo with lots of additional rules, and spins become dice rolls whilst numbers become Monopoly properties.

Some other additional features include:

Slingo Who Wants To Be A Millionaire 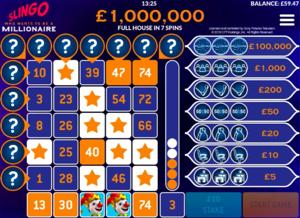 It’s time to take the hot seat in this fun Slingo take on the classic TV show.

Phone a friend, 50:50 and ask the audience are all included in the game too, so you’ll really get that proper game show feel.

Again, like with the Monopoly style Slingo game, there are a few variations here compared to the more classic Slingo variants.

Some of the additional features include: 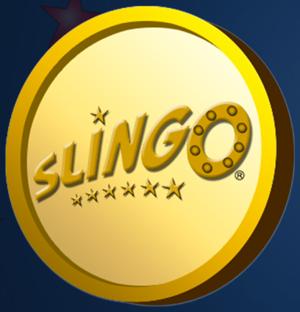 It’s very easy to see why this gaming style has taken off over the last few years. It’s fast, fun, and has loads of variations, plus it’s a great combination of two very different online gaming worlds.

It’s a nice little game to perhaps play on the go too, or if you’re don’t fancy committing to a full game of bingo.

The one thing I would say about Slingo as a whole, is that I do think it’s slightly more geared towards the slots market than bingo.

I think this is mainly due to the speed of the games themselves, and the spin button definitely makes it feel very slots based. It most certainly does combine bingo really well into the game, but it’s perhaps one more for the online slots fans out there.