Hurray, its the last week in November! Its beginning to look a lot like…Christmas. That means full steam ahead for festivities, fun, frolics and Christmas themed bingo. I just can’t wait for Christmas to hit me like a snowball in the belly!

We are ever thankful for Pragmatic Play dusting the snow off last years release of Snowball Blast, for another welcome appearance.

Snowball Blast is a variation of Blast bingo available across a number of Pragmatic Play run bingo sites. It was released last year in a very successful attempt to brighten the bingo playing nations mood amid the gloomy pandemic lockdown.  So we are thrilled to see the game on our favourite bingo sites yet again.

We totally loved their Beachball Blast, getting us into the summer holiday mood. 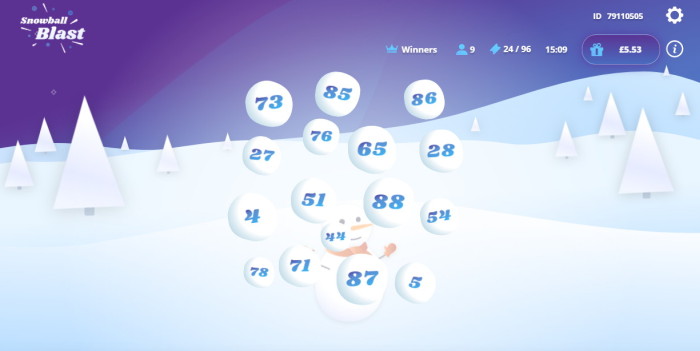 It is a different type of game to the usual bingo. You buy the bingo tickets as usual and it is a 90 ball game.  As the game starts, a cluster (well, I should say its a blast really) of balls are drawn at the same time rather than one at a time like normal bingo.  These are then marked off your ticket. So you may daub off 5 or 6 or even 7 numbers in the first shot. Then there is a a second blast with a further cluster of numbers being released simultaneously.

After the two initials blast’s of numbers, at a speed of knots, further numbers one by one are called.  Its a fast game.

Ticket prices vary from 2p upwards and player numbers are not that high, even at busy times. It is a sweet bingo room variant that players just pop in for a little…well, blast.

Its on Pragmatic Play network sites, so that’s Heart, Play OJO and a few others.