Ask a teenager what they think of bingo and it’s likely that they’ll describe something akin to the sort of game that you can expect to play visiting your nana in the nursing home.

Even if they’ve got some experience of playing bingo in person at a Gala or Mecca bingo hall then the chances are high that they’ll talk about the age of the participants and perhaps the fact that there seemed to be more women than men in attendance.

Bingo companies know all of this, of course, and they’re constantly fighting against the image of bingo as being an activity for older people, instead encouraging younger people to attend.

The problem is that they’re competing against any number of different things that people of a younger age will find more interesting. Yes, there’s the cliché about games consoles and mobile phones, but even away from that there’s nightclubs, bars and a desire to be constantly excited.

That has led some bingo creators to get inventive with the experience that they offer, with Bongo’s Bingo one such example. They combine the experience of playing bingo with an uproarious night out that is closer to a clubbing experience than the sort of thing that you’d get at Mecca on a Tuesday night. Is that necessarily a good thing?

The only place to start when talking about a ‘different’ experience for bingo players is with Bongo’s Bingo. Purple rinses and geriatrics need not apply, with the entire experience having far more in common with a night at that darts than one involving a sedate bingo caller rhyming numbers with things.

Imagine if Gala bingo served pitchers of beer, cocktails and asked people to do fashion shows up and down the tables in between bingo calls and you’ve got yourself somewhere close to imagining just what a night at Bongo’s Bingo might well be like.

Tickets for Bongo’s nights often sellout in a flash, with special guest stats such as the Venga Boys being common. It’s also moved worldwide, offering nights to residents of countries like Australia and Dubai.

The event, which was created by a couple of friends in Liverpool, does give you bingo cards and pens to make them with but don’t be surprised if yours go missing as the nights tend to get underway with a rave. It’s essentially a club night with a bit of bingo mixed in, seeing people singing along to cheesy music one minute and then trying to make their bingo cards the next.

The prizes don’t quite fit into the realm of standard bingo ones, either. Yes, there are cash prizes, often up to a value of around £600, but the Bongo’s Bingo crew keep things interesting by promising other things for you to win.

The likes of cases of Lambrini, cuddly unicorns and cardboard cutouts of celebrities have all beeb given away at past events. That just about sums up the approach that the organisation takes to its bingo offering, doing its best to make sure that this will be like no other bingo experience that you’ve ever enjoyed (or endured, depending on your take on it all).

Is It A Good Thing For Bingo?

Whilst Bongo’s Bingo has proven to be exceptionally popular, it’s entirely understandable that some people might ask whether it’s a good thing or not. The ‘party’ atmosphere at the events mean that it’s never going to be a true replacement for the sort of bingo that you would expect to find at a high street bingo hall. After all, can you really imagine your gran and grandad raving along to S-Club 7?

It’s also one that, overtly or otherwise, encourages a drinking environment. There’ll be plenty that don’t think that’s right at the best of times, let alone if it’s being seen as a way to encourage younger people to engage with bingo.

There’s also the fact that it’s hardly likely to be taken on as an approach by the more traditional bingo hall operators. That’s not necessarily a problem, of course. There’s a reason that the likes of Mecca and Gala have been operating for decades and will likely continue to do so.

Yet there’s also something in the fact that it might well encourage those organisation to move away from the more traditional and staid method of bingo play if it will encourage a younger set of people to begin attending bingo nights. A quick look on the Gala website shows that they’re already promising ‘club nights’, though the experience is nothing like what you’d get at Bongo’s!

How The Future Of Land-Based Bingo Looks 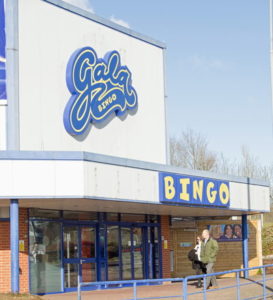 Bongo’s Bingo isn’t the only ‘alternative’ take on a classic experience, of course. The likes of Rebel Bingo and Rock ’n’ Roll Bingo also offer bingo with a twist. It’s suggestive of an industry that has no intention of going gently into that good night, raging against the dying of the light.

That so many bingo variations are proving so popular with younger people points towards a game that will never disappear completely from our high street. Even if the main operators can’t quite figure out the best way to engage with a younger audience, the fact that events such as Drag Queen Bingo most definitely are means that there’ll always be some sort of bingo playing that you can do.

There’s also the fact that people who have engaged with these sorts of bingo events will almost certainly progress to the calmer bingo offered in traditional bingo halls later in their lives. Some people won’t care about the bingo when the rock up to somewhere like Bongo’s Bingo, instead focussing on the party side of things, but plenty of other people will experience the game for the first time and fall in love with it.

That bingo is also such a popular game online means that they’ll have instant access to playing the game, maintaining their interest. In the immediate sense, then, the future looks bright enough for the bingo world, even if the current trend is what you might refer to as a little bit stark raving mad.