Two whole weeks have now past since the government announced that official ‘lockdown’ measures were to be enforced here in the UK due to the Coronavirus. All pubs, clubs, sports events and entertainment venues have since closed their doors to the public, and all upcoming events have been cancelled or at least postponed until further notice.

These new enforcements have shaken not only the UK, but also the entire world upside down, and this ‘lockdown’ experience has taken us all by surprise. As a nation we’ve had to learn how to deal with these new rules and regulations, but it’s also been amazing to see how bingo has continued to bring people together during these uncertain times.

Over the past few weeks, people all over the world have continued to use bingo as a way of staying social, and the game has helped keep communities talking during this rather difficult time. Different versions of the game are keeping spirits lifted in wacky and wonderful ways, and people are working hard to combat feelings of loneliness as self isolation continues across the globe. 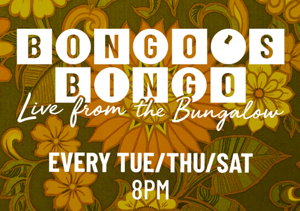 They trialled some live streamed bingo nights via the social media platform Twitch a few weeks ago, and have since made the decision to make these events a permanent thing during the Covid-19 crisis.

In an interview with The Confidential Liverpool, brand owners Jonny Lacey and Joshua Burke, said they wanted to keep the spirit of the brand alive online during these tough times. After moving in together with a few other pals to self isolate during ‘lockdown’, they decided to launch their ‘Live from the Bungalow’ nights.

The nights will be a crazy mix of Bongo’s Bingo, Jonny’s pub quiz and whatever else the team throw in.

The nights will last between 1 and 2 hours, and will be streamed live on Twitch at 8pm every Tuesday, Thursday and Saturday until further notice.

One of the most wonderful things about these events is that they are all free to join, and the brand have created a donation page instead where proceeds raised will go towards helping the NHS.

What better way to keep in touch and keep smiling over the coming weeks, than playing some bingo and dancing along with pals from your own living room, whilst also donating should you wish to a fantastic cause at the same time.

Some really heart warming photos emerged on Facebook last week, of a group of residents enjoying a game of bingo from a nursing home over in Australia.

According to an article in The Daily Mail, this group weren’t going to let the Coronavirus pandemic get in the way of their beloved bingo afternoons.

Staff and relatives helped the residents set up gaming tables in the hallway outside their individual rooms, and they walked up and down the hall making sure each player had heard each number as it was called.

The separation between each room meant that residents were still able to play along with their favourite bingo games each day, whilst still practicing the correct social distancing measures for safety.

One person commented on the picture saying:

I can just hear from down the corridor, what was that number again? Stay strong, dear elderly folk.

It’s so nice to think that people of all ages are still finding ways to keep positive in these dark times, and lovely to see that a classic game of bingo can still bring a smile to faces all over the world.

In an article posted on Wales247.com this week, Mecca Bingo employees in Swansea had joined forces with Swansea Council and some local charities to prepare hundreds of free meals for the most vulnerable members of the community.

As part of the SwanseaTogether project, this Mecca Bingo branch have been helping out by preparing and cooking hundreds of meals in the club’s kitchen to be handed out during this difficult time.

Mecca Bingo Swansea’s food supplier, Bidfood, have also said that they will continue to supply food as long as it is necessary too, in order to keep people safe and well whilst in isolation.

What Mecca have done in allowing us to use their facilities and team, has allowed us to provide much needed support to the vulnerable and housebound. Together we can get through this.

We are proud to all join together to share our help and support for the #SwanseaTogether program, by offering up our club as a place to prepare and cook meals for those in need in our community.

Our employees are phenomenal at giving up their time to help support important causes whatever the situation, and for that, we can’t thank them enough. We’ve all been asked to contribute to the national effort, and here at Mecca, we are delighted and determined to answer that call.

It’s so wonderful to think that not only the game of bingo is helping to keep spirits high during this pandemic, but also the bingo community as a whole. I’ve no doubt we will hear of more stories like this throughout the coming the weeks, as bingo hopefully continues to bring some light in the dark