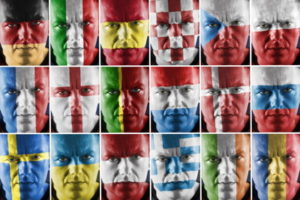 Bingo could be considered as one of the world’s simplest gambling games. It is easy enough to just buy a card for a set price, sit back and wait for the numbers to be drawn and called. Mark the numbers off as they are called and if you dab the entirety of your card, you win the game and take home the prize.  It is even easier online given the game happens automatically and you don’t even need to mark off numbers or call out.  Whatever game version you play, online or offline, it really is easy to get the hang of, and that’s probably why it has grown to be so popular with people.

Yet is this just a common occurrence within the United Kingdom, or is it true to say that multiple countries around the world enjoying engaging in bingo? Which countries have actually incorporated bingo gaming into their culture and legislation? As it happens, wherever you are in the world, it is likely that you’ll be able to access some form of bingo, whether that be in a land-based hall or online. And the history behind the game is also different from country to country, with subtle differences in gameplay also being experienced as well.

Come with us as we take a deeper look into what countries play bingo and how successful it is.

Obviously, if you live in the UK, then you’ll be aware of just how popular bingo gaming is. Perhaps it doesn’t hold the same level of popularity that it once did back in the day, but that does not mean it has gone away entirely. Previously known in the UK as Housey-Housey, became an increasingly popular gambling game in the country following the introduction of the Betting and Gaming Act 1960. More and more purpose-built bingo halls were opened as the years went by, right up until 2005.

Since that time, bingo halls experienced a marked decline in attendance and, as a result, revenue, leading to the closure of many of the halls. In 2005, almost 600 bingo halls were active across the United Kingdom, and by 2014, that number had been reduced to about 400. Closures of such have been blamed on high taxes, the smoking ban that was implemented in 2007, and the obvious rise in online gambling throughout the proceeding years.

The bingo most enjoyed in the UK is the original one featuring 90 balls, and it shouldn’t be confused with the U.S. version featuring 75 balls and slightly different tickets and calling.

Online bingo has also risen dramatically in popularity in the UK. Gone are the days when it was associated with little old ladies visiting their local bingo hall for a Friday night out. Instead, bingo gambling is now being targeted at the younger crowd, who can simply access it via their smartphone or home computer for a bit of evening fun.  Indeed, even offline bingo is changing for younger generations with ‘rave’ style bingo now becoming a big thing in many cities.

Across the UK, bingo is regarded as a leisure industry, and it is thought to be worth an estimated £1.3 billion.

Many people adhere to the idea that bingo originated in Italy, as did many gambling games. Back in its earliest days, it was known as Lo Gioco del Lotto d’Italia, dating all the way back to 1530. That translates to “The Game of Lotto of Italy”, and this actually operated in much the same way as a modern-day lottery. Players essentially placed bets on the chances of certain numbers being drawn, and by the 1700s, a version of the game was also played in France. It was there that paper cards were introduced to keep track of the numbers drawn by the caller.

Today, Italy remains one of the top countries in the world where residents participate in bingo. 90-ball bingo is the most popular variant played in the country, and it is host to around 300 bingo halls across its lands. As with the United Kingdom, it is becoming a lot more popular with younger gamblers, who are actually starting to visit their local halls to enjoy a few spirited rounds. Online bingo was also legalised in 2007, which helped it to garner more attention from enthusiastic players.

It was back in 1880 that Germany first began to embrace the game of bingo, and it has since developed its own variant that players enjoy participating in. This operates in a similar way to the UK variant.

Originally, the game was known as Lottospiel in Germany, and if someone believes they have won the round, they will shout out “volltreffer!”. Yet it is prominent to note that in Germany, bingo is much more of a form of entertainment, and it is frequently utilised as a popular method of teaching in cities and towns. Primarily, it is used for tutoring students in mathematics and spelling, although other subjects have also been integrated into it, such as history. And it is because of this that it has led to a popularity surge across the generations.

Germany plays host to around 40 official bingo halls today, where players can visit and engage in the game for fun. Yet the teaching method mention above has also extended into other nearby countries, serving as a fun way of schooling children.

It is common to consider the casinos of Las Vegas as being the primary source of gambling entertainment in the USA. Yet it has also claimed to be the “home of modern bingo” as well, and that could be quite a true statement. All the way back in the 1920s, an entrepreneur known as Hugh J. Ward, at carnivals in Pittsburgh and Western Pennsylvania would host such games. He went on to copyright his variation of the game before a number of versions were manufactured in the 30s and 40s.

The Catholic Church actually utilised bingo games as a way of generating funds for themselves throughout the years, and charities also took advantage of this sort of setup. Modest stakes were used, and money would easily be raised this way.

Each jurisdiction in the U.S. regulates how the game is played, but it is common across the whole country for the 75-ball variation to be active. A number of commercial games are run in land-based casinos every day, and what’s more, there is a similarity to Germany in the sense that bingo is also used as an educational tool in schools.

With regard to today’s U.S. bingo scene, it remains in action primarily by churches and charity organisations. The legality and stakes included in these games is determined depending upon state regulation. Bingo halls in some states may be rented out to sponsoring organisation, and these halls often run games on a daily basis, whereas the church-run games tend to take place once per week and take place on church premises instead.

Bingo has also been gaining popularity over the years in locations like Japan, which is one of the biggest players in Asia. Unfortunately, gambling laws within the country are quite stringent, with most forms of it being completely banned. Panchinko, lotteries and certain sports betting options exist as exceptions to this, though. Yet casino resorts have been incorporated into the country in more recent times as leniency creeps its way in. Physical halls and land-based casino games are not very popular as it happens, and online bingo is the primary source of entertainment rather than land-based games.

Something of note to comment on is that the largest game of bingo ever was held in Japan via the online sphere, hosting around half a million players who all participated in a single bingo game. This has been marked by the Guinness World Records organisation, with the game in question occurring on September 3, 2010 by 493,824 members of the Coca-Cola Park in Tokyo.

Usually, the 75-ball variant of bingo is much more popular with players in Japan, although there are many options available online to cater to those who want something a little different to the norm.

Many people probably won’t consider turning to Sweden for gambling details, but actually, the bingo industry there is worth billions. And what’s more, it has a stereotypically young range of players accessing it on a frequent basis. Furthermore, bingo existed as one of the only types of gambling game in the country that was never under government monopoly, and it could be due to this that it has grown so popular over the years.

Both 75-ball and 90-ball bingo serve as popular formats of the game for Swedish players to access. And as it happens, it’s not just Sweden that is prompting a large growth where bingo is concerned. Scandinavia in general is contributing to this boost, it’s just that Sweden is doing so in a large way, as it has continuously been expanding. The Swedish gambling audience for bingo has been compared to that of the United Kingdom.

And as it happens, Swedish drive-in bingo has become quite the favoured pastime of many people. This sees cars full of friends drive to a specific location in nature where they can view the scenery while engaging in the game. Most prominently found in the Swedish countryside of Lidköping, they have brought a new kind of bingo to the forefront.

Meanwhile, in the nearby country of Denmark, there are also plenty of ways to get involved in playing bingo. This includes both online and offline formats, and it has even obtained a quirky platform in an opera festival.

Yes, the Copenhagen Opera Festival of 2015 introduced its own Opera Bingo event to attendees at the Workers’ Museum. This saw entertaining hosts in attendance, and instead of offering players traditional cash incentives, the winners received an aria or two performed by some of the country’s greatest young talents!

While many countries tend to have an online or an offline land-based option for bingo (sometimes both), in Russia, you can also find a third route to take for bingo gameplay – television! Russian Lotto is a highly popular television show occurring in the country, and this has been active since 1994, including prizes for winners and a special jackpot for any winning ticket that acquires a full house in the first 15 number draws.

At the same time, the land-based version of the game is also popular with Russian players, even though it is actually possible to play from the comfort of your home couch. Yet people still enjoy going out and visiting bingo halls that operate across the country. Due to the fact that most forms of gambling are banned across Russia, save for a few specific locations, bingo has become the gambling game of choice for many people.

The most common form of bingo taking place in Russia is the 90-ball version, and this is because it is considered to be the easiest variant to understand. This is primarily the case when accessing such games online. And as with the United Kingdom version of the game, Russia has nicknames for the different numbers being drawn. These include: